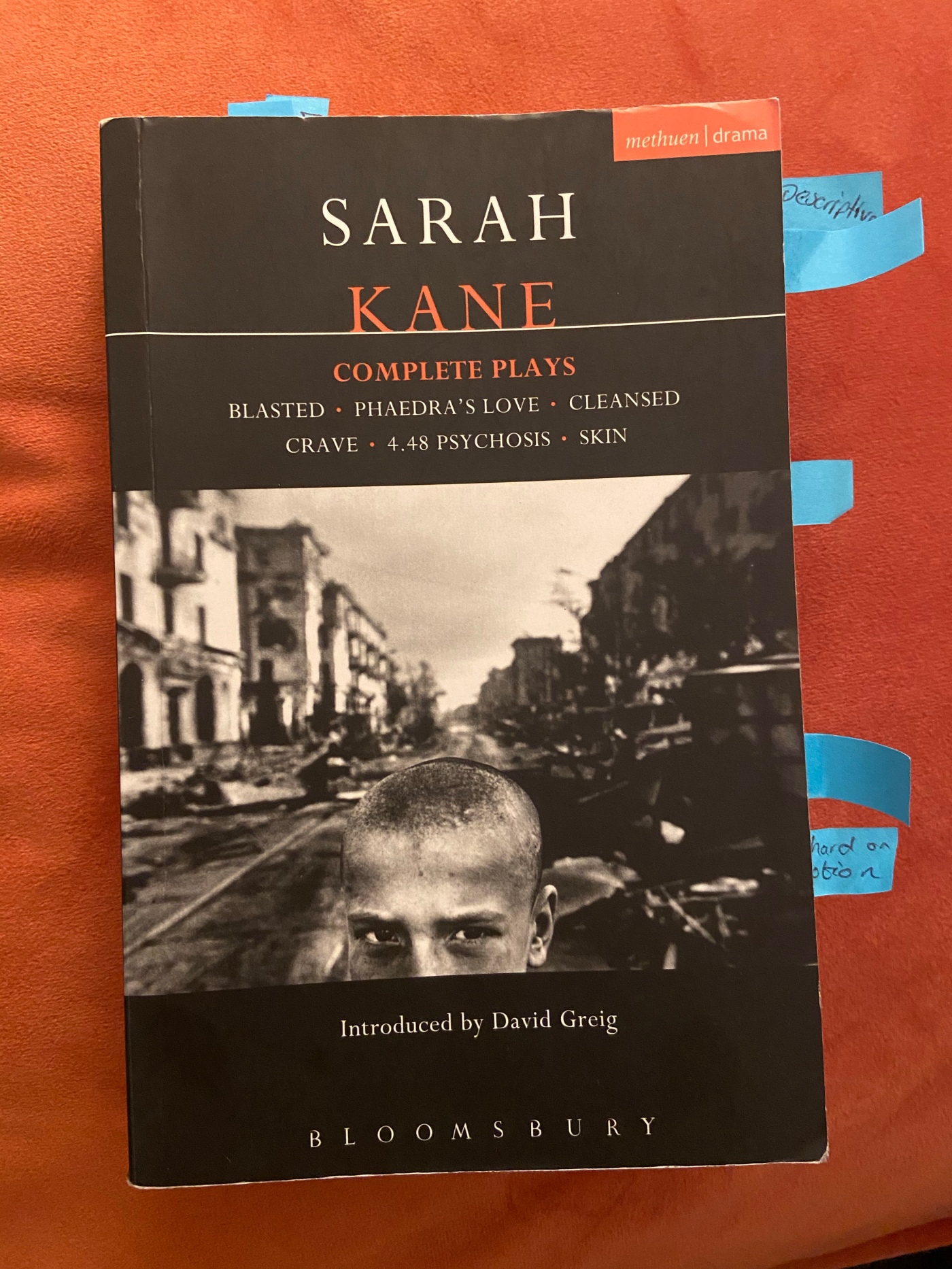 So its the new year, which means only one thing… more books to buy and read! While I’ve been sorting out my books onto a new bookcase I came across a load of scripts that I’d collected over the years. A not so secret secret; as much as I love books and writing, I have a love for theatre and reading scripts. One such script that I came across was by Sarah Kane, a writer of twisted and surreal plays during the 90s. Having loved studying her works during my time at university I wanted to revisit these plays once again.

When Sarah Kane’s first play, Blasted, was staged at the Royal Court Theatre, London in 1995 it was hailed both as a “masterpiece” and as a “disgusting piece of filth” (Daily Mail). That play, and the others that followed, have been produced all over the world. This anthology includes Kane’s never-before-published Channel 4 screenplay, Skin. Complete Plays include Blasted, Phaedra’s Love, Cleansed, Crave, 4.48 Psychosis, and Skin. (sysnopsis from Goodreads)

I knew going into this collection of bizarre plays that I was going to enjoy it, based entirely on the fact I loved them when I was younger. The years hadn’t diminished my love of the plays that explore the darkest depth of how humanity deals with the concept of love. I was immediately taken back to my times in the small flat I lived in at uni, reading these plays and imagining ways in which I could potentially stage one of them.

There are five in total and all explore how love affects people, not afraid to pull out the true grit and gore of the lengths people will go to either embrace or run away from the love they feel. I will say, that it is also the level of gore and gruesomeness that sometimes put me off the plays. Never do I see a need to try and humanise the brutality some people wish to exhibit, and there was a lot of, what seemed to be, needless rape and nudity (oh god why do I sound like someone from the Daily Mail).

Then there were my favourite bits…

When it comes to Sarah Kane’s plays I’ll always find myself returning to her work, reading through the plays either all at once or just in drips and drabs. They’re a great source of creativity and spurring on my own writing. It is an absolute shame that there won’t ever be anymore stories created by this rule-breaking artist. I would fully recommend everyone who enjoys theatre giving her plays a read or a watch, just to understand the manic world’s she created.

When it comes to scripts, I’m looking to read more of these this year, wanting to inspire myself with a more varied form of book. Let me know if there are any scripts/plays you’d recommend.